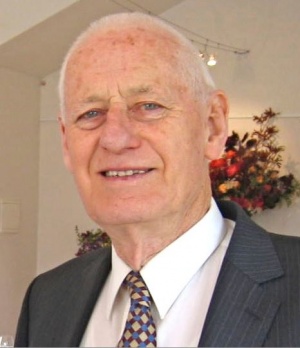 David Floyd Smith was born on the 21st of October 1928 and died on the 22nd of April 2017.  He attended Mount Barker High School from 1941 to 1945.  He had a wonderfully interesting and rewarding career in Agriculture Science and would encourage others to follow his passion.  This award is a modest contribution towards wider reading and some travel.

David was born at Clarendon and raised, with three sisters, on a dairy farm at Green Hills, about 15 kilometres south west of Mount Barker.  He attended the small Green Hills Primary School, only having between 10 to 15 students, which opened a year before and closed a year or so after his time.  Being only 12, with a compulsory school leaving age of 14, he attended Mount Barker High School, at times intermittently as buses stopped and started, and cash had to be found to pay.  His day was full, after hand milking his quota of cows, he rode a bike into Meadows to catch the 8am bus to Mount Barker.  Perhaps understandably, he was often a bit sleepy in school, and doing little homework, he was rarely in the upper half of the class.

He found some great companions at high school and he had some good teachers, especially the Agriculture, Science/Chemistry teacher, Colin Haines.  He learned enough theory, and revelled in the practical - exploration of landscapes and interaction with wildlife.  Through school, family, neighbours talk and working at a variety of jobs in the holidays, he learned the history of land development - clover, fertilisers and equipment.  Understanding of the practicalities and quirks of rural lifestyles were to stand him in good stead in a great career.

David married a teacher from Mount Barker High School, Marian Shinkfield and they had four children.  She passed away in 1982.  Marian and the children sometimes shared in David’s travels.  David was awarded a Carnegie Travelling Fellowship which recognised his family and funded them to be ambassadors.  The family travelled for a year around the world, spending eight months in North America.

On another trip, David travelled to Canada, where he made contact with distant relatives, Dr Barry Wecker and wife Alberta. Through this connection, they travelled to Africa where Barry had established an orphanage in the Congo for Rwanda children.  Barry had long wanted to underpin agriculture in his project and also contribute to the betterment of agriculture over a wider region in the Eastern Congo.  David had many plans to help Barry with this.  Agronomists of the region were brought together for a refresher course in modern agriculture run by David.

David had made about 50 journeys to different parts of the world.  Many of these trips were to focus on places with a similar climate to Southern Australia, while others were with a focus on research and educational facilities.    He had been trained to consider a soil, plant, animal ecosystem and one of the biggest debates within the agricultural industry is animal grazing management. David and his travelling companion (after the death of his wife), Pamela Wilson, travelled to Serengeti, in East Africa.  They met with Alan Savoury and saw first-hand how he used a system of predating lions to circulate the herds of grazing wilde-bestes who break out only when feed gets very short.

The pinnacle of his career was the appointment as Director-General of the Victorian Department of Agriculture - nearly 3000 staff and about 80 locations through-out Victoria.  He had a great series of experiences to prepare for this - not least his upbringing, schooling and appreciation of rural life, he understood the ‘language’ of the countryside.

Earlier experiences had been teaching Agriculture on the Eyre Peninsula, researching pasture problems in the South East of South Australia, lecturing and researching at Melbourne University, establishing a Higher Education College at Launceston, advising the World Bank and the United Nations on agricultural and educational matters in various parts of the world and reviewing the Agriculture Agency of the United Nations.

For many years, there was an International Centre for Research into Dryland Agriculture (ICARDA).  Colleagues and former students of David’s have been strong contributors to this as Australia leads the way in dry land farming.  There was a special program in which 12-15 farmers would be brought in from a country for intensive training, including the science, machinery and especially zero-tillage, direct drilling the crop.  The whole Middle East has been involved. David had visited ICARDA on a number of occasions.

David has degrees in Education (Dip Ed and M Ed Ad Min) and Sciences (B Ag Sc, M Ag Sc and Ph D), several medals (Medal of Australian Agriculture and Centenary Medal of The University of Melbourne), travel awards and is a member of The Order of Australia.

By the 2000’s David was regarded as an important elder of the ‘tribe’ of agricultural scientists.  He wrote a couple of books - Natural Gains, largely describing the super and sub clover story and Rain and Shine, a simple guide to how plants grow.  He has also had many essays published in various journals and papers.