In January 1999, Mount Barker High School was very fortunate to have Matt Baird appointed as their new Chaplain. Matt’s service continued until December 2013, which resulted in him being one of the longest service chaplains in South Australia.

In early discussions with Matt, he explained that the Chaplain’s role wasn’t a job; it was a major part of his life. It was his calling to support and work with young people in the Mount Barker region and he was blessed with the role as Chaplain. To say Matt was passionate about the school was an understatement; he loved his work and looked forward to working with students at Mount Barker High School, which later extended beyond the school - in a range of weddings and other official functions.

Matt had a wide range of skills when working with students. His background as Primary School teacher enabled him to support students across all subject areas and he was often seen working individually with students and in small groups. This broke down all barriers as students became very comfortable to work with Matt, and was the basis for the strong relationships he developed with both staff and students.

Matt loved the outdoors, often volunteering to support interschool sports, especially cricket, where he coached and umpired. He always attended our Outdoor Education camps. On these camps, Matt showed his passion for nature, sharing his wisdom and experience with our students.

Matt always made himself available to the school and was the first one to offer help when required. During a number of tragic events, Matt was an integral part of our Student Support team and he provided hours of additional support to both students and staff. This was often to the detriment of Matt’s health, but he never complained and always said, “It’s my calling and I need to do this.”

Matt attended four of the school’s ski trips and had a love for skiing and wanted all students to develop the same passion and skills. His dedication to helping students learn to ski, resulted in him becoming hypothermic on one occasion, as he stood on the mountain with two students in the rain helping them learn.

Matt was also was concerned about the number of students who attended school without breakfast. He established the Wednesday morning Breakfast Club, where local volunteers from our community churches prepare a simple breakfast for our students. This program has been successfully operating for many years and still has an average of four volunteers each week.

Matt’s legacy at Mount Barker High School is like a ripple in a lake - it has had many effects on many lives, some of which may continue for many years, and in these ripples Matt will be remembered. 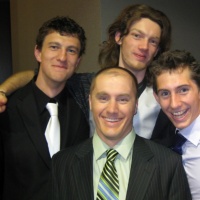